The Dezeen guide to solar power


This Dezeen guide to solar power, which forms part of our Solar Revolution series, explains the different types of photovoltaics from the well-established to the more experimental.

Solar is a clean, renewable and relatively cheap source of energy that is expected to become more widely adopted as the world weans itself off fossil fuels.

Often when people talk about solar power they are referring to the photovoltaic process by which the sun’s rays are captured and transformed into electricity. 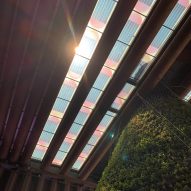 “Now is the time to design a solar future”

Solar cells containing semiconductor materials are what capture the sun’s energy in this way, but there are multiple different types.

Here is an explainer of the various kinds of solar cell technology, which has been put together in collaboration with Theo Hobson, a postdoctoral researcher in solar physics at the University of Liverpool:

Silicon-based solar cells are by far the most prevalent, making up around 95 per cent of the commercial photovoltaics market.

They are made using crystalline silicon derived from sand, though they also require some rarer elements like silver.

Silicon solar cells are currently the most efficient solar cells available, turning about 24 per cent of the energy from the sun rays that strike them into electricity. A silicon solar panel in the right spot can typically pay back the energy used to make it in under two years, with a lifetime of about 25 years.

Because silicon solar cells are rigid they are normally arranged into flat panels that are fitted onto rooftops or set out as solar farms. These formats are expected to continue to dominate the solar energy market in the near future.

Thin-film solar cells, which make up the majority of the remaining five per cent of the photovoltaics market, are usually made using either cadmium telluride or copper indium gallium selenide (CIGS).

Cadmium and tellurium are both mining industry by-products, so relatively accessible and cheap – though it’s predicted that supplies of the rarer tellurium could become less readily available in future.

The elements used to make CIGS solar cells are harder to come by because they are also used in touch screens, so are in much higher demand.

Scientists are exploring thin light-absorbing alternatives to cadmium telluride and CIGS such as kesterite, which is composed of common elements like copper, tin, zinc and selenium.

Thin-film solar cells are less efficient than silicon cells with a maximum power conversion of about 19 per cent, though they require less energy to manufacture in the first place. Their main benefit is that they are much more flexible than silicon cells so have a wider range of possible applications.

It is also possible to produce solar cells from organic, carbon-based molecules – though this technology is still at the research and development stage.

If they become commercially viable, organic solar cells would have the advantage of requiring much less energy to produce and not being reliant on finite elements, making them potentially cheaper to manufacture.

In addition, it is possible to tune organic solar cells to different light wavelengths like infrared, so they can be transparent but still capture the sun’s rays. However, the technology remains relatively inefficient and unreliable.

Mostly organic solar cells are produced from polymers like plastics, though some researchers have taken the idea further. In 2020, engineering student Carvey Ehren Maigue won a James Dyson Award for his AuReus system, which turns waste crops into cladding that harvests energy from light.

One rapidly advancing area of solar technology is the concept of tandem cells.

This is where solar cells – like those described above – are used in combination with each other, optimised to absorb different waves of light. That way an individual solar panel can make more effective use of the solar spectrum.

The goal is to break through that 24 per cent efficiency ceiling and generate much more energy from the sun, rendering solar power even more competitive compared to fossil fuels.

Tandem technology could also make organic solar cells practical, by stacking the transparent cells on top of one another tuned to capture different light wavelengths.

Historically tandem solar cells have been so expensive to make that they were not cost-effective, but new designs are emerging that could change that. For example, Oxford PV, a company associated with the University of Oxford, layers thin-film perovskite over conventional silicon solar cells to produce a product that it claims could have more than 30 per cent efficiency.

In a domestic setting, solar thermal panels may be installed on a roof facing the sun to heat water stored in a cylinder that can then be used for hot water and heating.

Examples include VirtuHot by British company Naked Energy, a solar thermal panel that can heat water up to 90 degrees Celsius.

This article is part of Dezeen’s Solar Revolution series, which explores the varied and exciting possible uses of solar energy and how humans can fully harness the incredible power of the sun.

The top photo is by Anders J via Unsplash.