New York architecture studio ODA has released designs for the 633 SE 3rd Avenue skyscraper in southern Florida with a series of cylindrical tubes arranged on top of a tree-covered podium.

The 47-storey tower will be built on the southern edge of Fort Lauderdale’s downtown, near the New River in the residential Rio Vista neighbourhood, one of the oldest in the city.

Early plans show 633 SE 3rd Avenue having a height of 563 feet (172 metres), with an L-shaped grouping of tubular massing rising as a tower from the corner of a landscaped podium.

“While the tower design celebrates simplicity of materials and forms through the repetition of wrap-around balconies and sleek rounded volumes, special attention was paid to the design and detailing of the building base in order to engage at the street level,” said ODA.

The nine-storey podium will have arched entries into the lobby and amenity spaces on ground level. A parking garage will also be included in this part of the structure.

Glass-covered tubular facades will characterize the residential aspect of the pavilion, while the parking structure will be clad with a more opaque design featuring “inverted” arches covered with vertical louvres.

“At night, the concave recesses of the parking facade create a decorative wall of light and textures that adds to the ambiance of the neighborhood,” said ODA.

Topping the podium on the 10th storey will be an open-air space complete with landscaping and multiple swimming pools. This space was designed as a buffer between the podium and the tower. 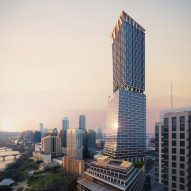 The amenities will continue indoors on the 10th storey with 20,000 square feet (1,858 square metres) of restaurants, lounges and exercise facilities.

From the podium, the tower itself will rise in a series of stepped tubular vertical massings. Throughout the facade there will be breaks in the massing to include some double-height terraces as well as smaller landscaped outdoor spaces.

“Double height voids are strategically distributed throughout the building to alleviate the massing and bring the light into the corridors,” said ODA.

“Through these carved double-height voids and setbacks, the building offers a series of common terraces for its residents at different levels with wide open views to the city.” 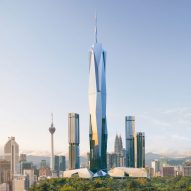 Fifteen supertall skyscrapers being built around the world

The designs show some aspects of the facade being smooth, but most of the exterior is broken up visually by circular floor plates that extend past the glazing. In total, the tower will have 830 rental apartments on top of the commercial space in the podium.

ODA, a studio founded in 2007 by Eran Chen, has been at the forefront of a design boom in Fort Lauderdale. This year it announced two other residential skyscraper designs for the city. If completed, ODA’s towers will be the three tallest structures in the city.

Other skyscrapers going up in mid-size American cities include KPF’s supertall Waterline in Austin, set to be the tallest structure in Texas.

The images are by VERO Digital