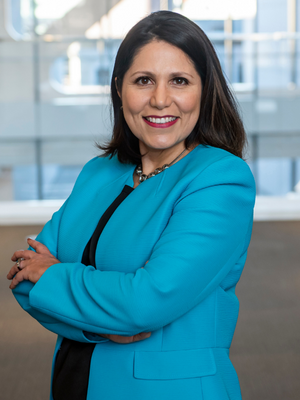 “What I saw as a disadvantage at the beginning, I turned it around to make my secret weapon, because I realized this is what makes me unique and able to see things from a different perspective,” says Claudia Vazquez. “I turned my disadvantage into my differentiator.”

As part of celebrating Hispanic Heritage, we open our Latina Leader series with inspired sharing from Claudia Vazquez: her vision for Hispanic inclusion and lifting others up with her!

A Vision For Service

If you only read her official business roles across the years, you’ll know at best half of what Vazquez has truly been up to in the workplace.

Originally from Mexico, Vazquez came to the U.S. in her twenties, teaching English as a second language and volunteering as a citizenship instructor. When she began her career 22 years ago in disability claims at Unum, she immediately saw how she could leverage her bicultural/ bilingual assets to better serve the company and the Hispanic community.

Rather than going with the status quo process of using a third party translator, she began to field all calls from Spanish-speaking clients around disability claims. She then led the implementation of the Hispanic Initiative to create end-to-end bilingual services, eliminating cost and time inefficiencies of outsourcing. Within seven years, she went from claims specialist to heading up the Short Term Disability and Administrative operations in her field office in California.

“I didn’t approach with a diversity mindset. I approached with a service perspective,” reflects Vazquez. “I realized we could improve the service, have more loyal and satisfied customers, and use it as a selling point with clients. It also gave Spanish-speaking employees an opportunity to go above and beyond, support their community and receive recognition for speaking another language.”

When she moved to her next role at Cigna, she replicated this thinking and was asked to find more people with an intrapreneurial mindset like hers. She began to support the recruiting team in Hispanic outreach, emphasizing the importance of representation: “Nobody grows up thinking I want to work at an insurance company,” she argued. “So if we don’t personally represent what we’re trying to attract them to do, this is not a natural fit.”

Moving to the East Cost for a role in Prudential’s head offices, Vazquez enrolled into the Hispanic BRG on her second day. Within six months, she was co-leading the BRG and soon increased membership from 400 to 1000 – while creating best practices, relationship with hiring teams, and outreach to external partners.

“As my passion for supporting the Hispanic community at work evolved, I realized we have to start grassroots and then let things organically develop, so that a ripple effect is created,” says Vazquez. She began to focus on seeding the momentum that allowed partnerships to prove their value as they grew. With this approach, the Red Shoe movement proved so successful that it caught leadership attention and she traveled to Mexico and Brazil to highlight and expand the partnership.

An Advocate for Hispanic Inclusion

As a Hispanic Initiative officer, Vazquez saw the impact of bringing in change-agent partners. She began to shift to building those external relationships such as with We Are All Human and became a Hispanic Star Ambassador. As such, Vazquez has attended the United Nations as part of the delegation to roll out the Hispanic Star unifying symbol and platform to advance Hispanics in the US.

Despite a strong track record of following her mission towards inclusion, only in March did Vazquez formally move from senior business roles to take on a VP of Diversity and Inclusion role. In the role, she developed a strategic roadmap for inclusion on hiring, retaining, developing and celebrating Hispanic talent, laying out both fundamentals and execution strategies.

“I have a passion towards supporting the Hispanic community, but I also see it as a business imperative in the US. Anyone that’s not attuning to Hispanics is going to lose market share,” says Vazquez, pointing out Hispanics make up one of every five people and growing.

Vazquez also iterates that attracting early loyalty among the Hispanic community is critical, because word of mouth and following the family or neighbor recommendations are huge influences on decision-making.

Lifting Others Up With Her

As a Hispanic BRG leader, Vazquez also leveraged the opportunity to mentor and sponsor others in the workplace. She brought more visibility to group members by creating project management opportunities – with clear job descriptions and weekly time investment required – and then by updating their managers about the impacts they were delivering.

“This gave their managers an opportunity to see their employees from a completely different angle of perspective that they had not necessarily experienced directly with them,” says Vazquez. “I wanted to make sure people saw they had everything it took. They just sometimes needed to be able to sell or position themselves differently.”

Vazquez emphasizes staying connected to your own essence and North Star. “I’ve promised myself that regardless of how fast or how far I’m going, I’m still going to be me and not forget where I came from. And I’m not going to forget that there are many individuals still looking to find their path.”

This is what drives Vazquez in her personal mission that co-exists with the day job. It’s why she shares her story to inspire students through HISPA. It’s why she’s available if someone reaches to her on Linked In. It’s why she founded elevink to mentor younger generations on mindfulness, creating a personal brand, and challenging them to envision their future so they begin to steer their choices and energies in that direction.

“Sometimes we question ourselves and protect ourselves because we’ve been through so much. In my case, I’ve been working since I was 14 in Mexico to help my mom, I paid for my education, I left my family to come to the US with English as my second language, I began working with an associates degree and studied full-time while working, so there are sacrifices,” says Vazquez. “But if I had the confidence in my 20s I have now, I don’t know how much larger the impact could be.”

She continues, “We need to trust our gut. We know exactly where we see ourselves, but sometimes we’re afraid to share that vision,” she says. “We just need to move confidently in the pursuit of our dreams. From every setback, we can learn.”

Often the only Hispanic at the table, Vazquez never gives up the vision. Instead, she allows time to pass and looks for new opportunities and angles to pursue: “After many years of navigating Fortune 500 companies, I have learned how I need to approach certain things, and I also understand that change is difficult. Companies will be ready at a certain time, and when they are, things will happen.”

Reflecting on her own journey: “After 25 years of revalidating, I have nothing to lose and a lot to gain. I’ve become more of an unapologetic Latina who stays optimistic about our future possibilities, but it took me 22 years of going through this journey to realize that it’s my life, it’s my vision, it’s my calling.”

Vazquez has learned to take herself a little less seriously. She recently returned from a self-care trip to California with her mother and sister, leaving her husband and three children back at home. She recommends taking the time to celebrate your achievements.

As for her vision: “I’m still getting closer to where I ultimately see myself: as a CEO of a nonprofit organization that caters to Hispanics. That’s what I’m aiming and preparing myself for in the long run. My goal is to leave a mark in the evolution of Hispanics in the US.”