Singapore is uniquely placed to develop solutions to the world’s biggest design challenges, according to Dawn Lim and Mark Wee, organisers of Singapore Design Week, which is taking place this week.

“If you look at all the major challenges that the world faces – you talk about urban densities, ageing populations, rising sea levels – you name it, we probably have it. And so that creates a very optimal location to test for solutions that might address some of these issues.”

“We are both very enthusiastic about this idea of Singapore being a prototyping hub,” added Wee, festival director of Singapore Design Week.

Singapore is a “nation by design”

The island city-state of Singapore became a sovereign country in 1965 and developed rapidly into a global economic power through free trade with minimal tariffs or restrictions.

This open economy, as well as its size, location and geography, are all factors that make Singapore an excellent testbed for everything from autonomous vehicles to mitigating the effects of climate change, according to Lim and Wee.

“We’re a compact city-state, an island of about 750 square kilometres, and we’ve had to tackle everything that a country and a global metropolis needs on this island,” said Wee.

“So, historically, that has forced us to be extremely efficient and to test technologies and new systems in a small, contained way on different parts of the island before we can scale it at the national level.”

Lim added: “If you look at the history and the genesis of Singapore, the entire thing was by design. We actually like to say that Singapore is a nation by design.”

“We have no natural resources, we have not a drop of oil to our name, we have no access to clean water naturally” she continued.

“But we have developed our own technology to clean our own water, which we now commercialise to other countries in the world. We created public housing policy that [despite the scarcity of land] enables 80 per cent of the population to afford their own homes. These are policies by design, due to the constrained situation that we have geographically, historically, economically.”

Lim and Wee hope that this year’s edition of Singapore Design Week, which is running from 16 to 25 September 2022 after a two-year hiatus, can be a platform to showcase the design talent from the region, as well as what Lim describes as its “thought leadership”.

The design week is structured around three key themes, which the organisers describe as “pillars”. These are titled: Design Marketplace, Design Impact and Design Futures.

“We want to show that design can bring a better future”

One of the flagship events of the festival is the Design Futures Symposium, which is directed by MoMA curator Paola Antonelli and has the full title of Agency for the Future: Design and the Quest for a Better World.

“I think that title really sums up how we see the future, that design is able to bring us into a brighter future,” said Wee.

“We want to showcase and talk about how Singapore could – in our unique approach based on modelling, prototyping, testing – perfect solutions for preferable futures. I feel that coming out of Covid, we want to show that design can actually bring hope and bring a better future. Don’t we all need that?” 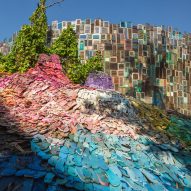 According to Wee, the symposium is an example of a new emphasis this year on systems design, which he believes plays to Singapore’s strengths.

“This idea of design being able to shape entire systems, or new systems, is really a large part of the conversation now,” he said.

“In Singapore, a lot of the way we’ve tackled our issues has been in a systemic manner. It’s in this idea of design beyond just how things look, but really designing entire systems, that I feel we are able to bring to the conversation today in a way that might be meaningful.”

Dezeen is a media partner for Singapore Design Week, which features 50 events involving more than 200 designers and creatives over 10 days.

Other key events taking place in Singapore this week as part of the design week includes FIND – Design Fair Asia, a new design trade fair, which features a dedicated section to showcase the work of Southeast Asian designers.

“I want the festival to be able to really give the talent that’s on this island visibility because they’re doing amazing work,” said Wee.

“Hopefully that also inspires people around the world to come here and work with them, to collaborate with our local designers to be able to really make the world a better place. It sounds idealistic, but that’s really true.”