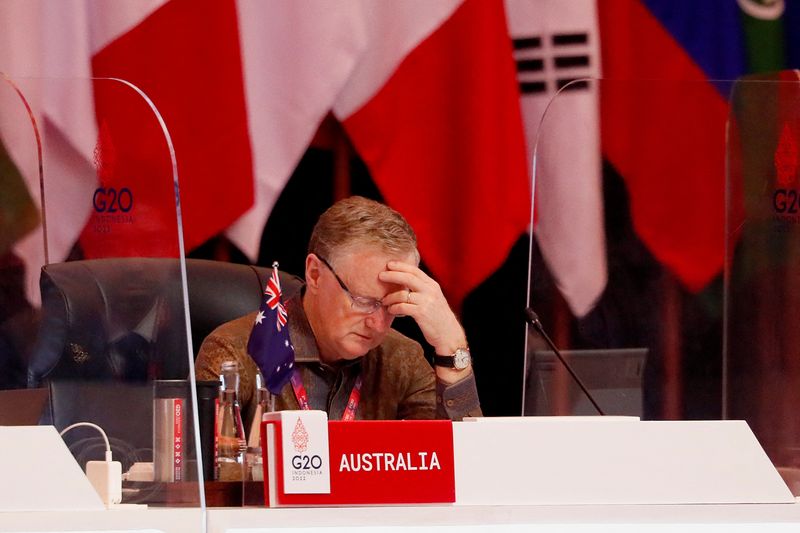 SYDNEY (Reuters) -Australia’s top central banker opened the door on Thursday to slowing the bank’s policy tightening after five rate increases in as many months, sparking a rally in bonds as markets scaled back bets on further aggressive moves.

In a speech on the policy outlook, Reserve Bank of Australia (RBA) Governor Philip Lowe said further rate increases would be needed to contain inflation but the RBA Board was not on a pre-set path and was aware rates had already risen sharply.

“We are conscious that there are lags in the operation of monetary policy and that interest rates have increased very quickly,” said Lowe.

“And we recognise that, all else equal, the case for a slower pace of increase in interest rates becomes stronger as the level of the cash rate rises.”

The RBA lifted interest rates by half a point on Tuesday to a seven-year high of 2.35%, bringing the increase since May to a steep 225 basis points.

Just the hint of a possible slowdown saw futures lengthen the odds on another hike of 50 basis points in October, with rates now seen more likely to reach 3.0% by December, rather than 3.25%.

Lowe emphasised the Board was committed to bring inflation back to its 2%-3% target band, having been surprised by this year’s spike in consumer prices to a 21-year peak of 6.1%.

He said it was important the current high inflation not get built into expectations for price- and wage-settings, adding that, so far, measures of expectations were still consistent with a return to the 2%-3% band.

Lowe conceded the RBA had been badly wrongfooted by the surge in inflation in recent months and said it was important for the bank to learn from those mistakes.

Australia’s Labor government in July launched an independent review into the RBA’s structure and policies, and how it handled emergency stimulus during the pandemic.

The central bank has come in for much criticism on its forecast mistakes, particularly Lowe’s (NYSE:) prediction in late 2021 that rates would likely not rise until 2024.

Treasurer Jim Chalmers was forced on Thursday to reject calls for Lowe to be fired, saying he was not going to take “pot shots” at the independent central bank.

Asked about the criticism after his speech, Lowe said: “I have no plans to resign. Look at how much better the economy is now.”